Plainfield's population is 40,000 people, why do you need such a big building?

How much will it cost?

Click here to view a projected cost estimate for the renovation and addition.

How is this different from the last plan?

The March 2016 plan involved 2 ballot questions: a referendum for a building bond of $39M and a 3 cent operating rate increase. This plan is 1 question, raising the limiting rate to allow for the purchase of building bonds and to operate a larger building. The 2016 plan called for a brand new 72,000 square foot building; this plan is calling for a renovation and addition to the current building for a total of 50,000 square feet.

Why is the new referendum cost to taxpayers not that much different from the last referendum?

The 2016 plan called for 2 referenda: one for new construction for a building triple the size of the current one for a cost of $39M for a building bond, then a second small (3 cent) limiting rate increase. The larger, new building would have offered efficiences and savings in staffing that renovating the existing building and adding on to it will not offer. Therefore, operating costs will be higher. The new plan calls for planned savings each year to accommodate future growth and capital replacement costs. The new plan is $14M less in building costs and bonds, which carry interest.

What is an operating cost and why do you need it?

The Library's operating budget covers staffing, materials,  supplies, etc.; everything needed to operate a building. It does not pay for capital expenditures such as replacement of mechanicals, furniture, renovation, etc.; that money comes from a special reserve fund that needs to be built up to pay for large expenditures like a new boiler. The Plainfield Library has been operating so leanly that it has not been possible to save enough money to cover those massive expenses.

Why is the proposed construction cost greater than that of any other municipal building?

Libraries have very specific requirements for building that include accounting for the considerable weight of books. Other added costs that were not part of the 2016 plan include the added expense of moving twice and a longer construction period due to renovating the current building and putting on an addition while remaining open in the building.

Why can't the Library tap into the existing Village budget? Is the Village benefiting financially from expensing this to the tax payers?

The Plainfield Library District is a completely separate taxing body from the Village. The Village of Plainfield and the Library District budgets are separate. Other communities, like Naperville and Joliet, have municipal libraries, which do function as departments of the city.

What measures has the Library taken since the failed referendum in 2016?

After the referendum failed, the Board of Trustees implemented several cost-saving measures for the new fiscal year which began in July 2016. These included a hiring freeze that has left the Library with 200+ hours per week of unfilled staff time which has led to program cuts (book groups, services to children with special needs), no Sunday hours, the programming budget cut being cut in half, and the elmination of fine-free programs such as Food for Fines.

If Plainfield’s grown that much, that means you have proportionally that much more money. Why don’t you have money saved to expand?

While the Library District’s revenues have increased as a result of growth, the cost of providing Library services has also grown.  The net result is that there are very limited surplus funds available to be “saved” for expansion.

The Library District notes that revenues are “capped” from year to year by the Property Tax Extension Limitation Law (PTELL).  PTELL caps year to year revenue increases at 5% or the CPI (Consumer Price Index), whichever is lower.  In recent years, the CPI has hovered at around 1-2% thereby limiting additional revenues.

In order to fund an expansion plan and future operations, the tax rate limited by PTELL must be increased by voter approval.

For more information on PTELL:

How much will my taxes go up?

What percentage of my tax bill belongs to the Library?

The Plainfield Library District currently accounts for 2.12% of your total tax bill. If the referendum passes, the Library will account for 3.96% of your tax bill. (Click on the chart to download the Excel Spreadsheet.) 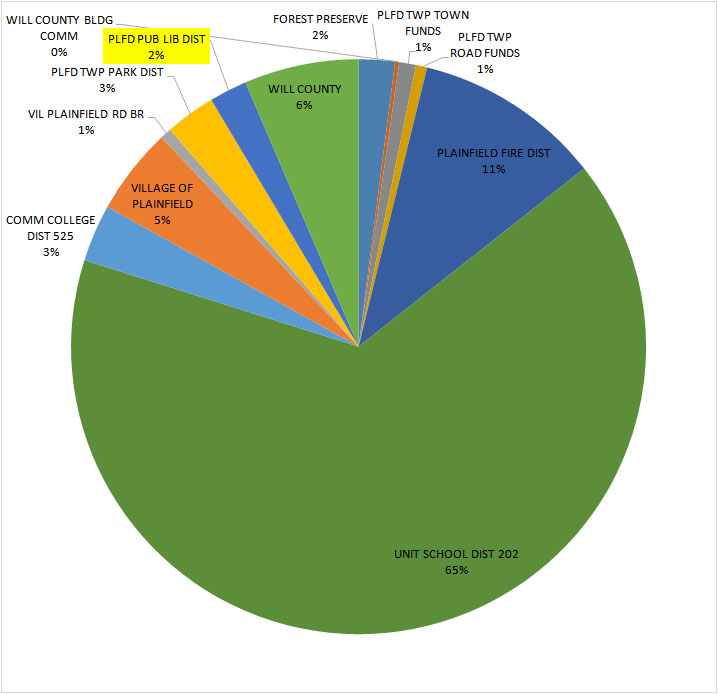 What is the Library tax rate?

The Library District's tax rate is .2021%. The proposed plan would increase the tax rate to .3775%. This chart will show you how the Plainfield Library compares to other libraries in the area and in Chicagoland.  Click to download the Tax Rate Comparison Chart (.xlsx)

What is the tax rate of other area libraries?

Plainfield Library has one of the lowest taxes rates in the Chicagoland area and has not had a tax rate increase since the building bond was passed in 1990. The Fountaindale Library's rate, for example, is .584% and Oswego Library's rate is .301%. To see a comprehensive list of the tax rates, budgets and population size of libraries in the extended Chicago area, click to download the Tax Rate Comparison Chart (.xlsx)

We said no new taxes so why is the Library going to Referendum?

The Plainfield Library District is not able to continue to operate with the same tax rate it has had for the past 27 years; the needs of this community dictate a larger, expanded library and a larger operating budget to serve the community of 75,000+ people. The District's projected population is over 90,000 by 2019, when the building would be completed.

What happens if the referendum doesn't pass in April?

The Board of Trustees and management team are creating a contingency plan. This involves a study of all building systems, identifying what improvements are needed immediately and which items can wait. A new operating budget will be implemented, calling for monies to be set aside for these capital improvements. In order to do this, material and programming budgets will be cut further and there may be additional cuts to hours and staffing.

Taxes were raised to pay for the current library. When do those bonds retire?

How many times has the Library put on a referendum?

1925 A bequest from the Nimmons family for $25,000 was given to establish a tax-supported village library, which opens in 1926 in a 750 square foot building on Lockport Street

1990 Branch location in Grand Prairie Elementary is damaged by tornado; school district does not renew the lease as they need the space to expand

1997 Lower level completed and hours are restored, using proceeds of sale of farm property donated to the Library in 1954

2010 Building bonds from 1990 referendum were paid off

2012 After community feedback, the Board chose to not place a referendum question on the fall ballot

2012 An assessment was done of the aging facility; capital reserve fund used to address the immediate and short-term identified needs

How big will it be?

Why not put a branch on X street or near Y?

The Library Board has studied the option of branches and decided early on that the most cost-efficient way to proceed at this time is to concentrate on improving the one building that is in the geographic center of this district. A branch/satelitte facility will absolutely be considered again in the future.

Why was the downtown location selected?

The Library currently sits at the geographic center of the district. After the 2016 plan was rejected, the Board of Trustees asked the community for feedback. The feedback said to stay downtown and scale back the scope of the design.

Why does Plainfield need a bigger library?

The current building does not meet the contemporary needs of the communtity due to lack of space, flexibility, or modern conveniences ( drive-up return,  social spaces, teen area, variety of meeting rooms, etc.). In addition to providing access to printed materials and technology, libraries offer vibrant social and cultural experiences. Space limitations result in difficult service decisions because we simply cannot provide everything you need in our current building.  The Library District's population is projected to be over 90,000 by the time an expanded building is completed.

What will the question look like on the ballot?

Shall the extension limitation under the Property Tax Extension Limitation Law for the Plainfield Public Library District, Will and Kendall Counties, Illinois, be increased from the lesser of 5% or the percentage increase in the Consumer Price Index over the prior levy year to 88.5% per year for the 2017 levy year?
Supplemental Information Required with the Ballot:
(1) For the 2017 levy year the approximate amount of the additional tax
extendable against property containing a single family residence and having
a fair market value at the time of the referendum of $100,000 is estimated to be $58.47.
Please note that, per Illinois statute, the calculations are based on 2015 property values and do not factor in homestead exemptions.

What does the question mean in plain language?

There are multiple reasons for programs being full--one reason is our space constraints--we can only fit a certain number of people in our meeting rooms. Another reason is that presenters have limits on the number of attendees, particularly for programs that have supplies, such as craft or cooking programs. A third reason is that the quantity of programs has been cut due to a loss in staff, who are responsible for planning, organizing and conducting programs.

Why can't you use the rooms at the schools for programs?

The library does programming in the mornings, when the schools are in session as well as after school and in the evenings, when the schools' spaces are in high demand. In addition, many of the programs hosted by the library require A-V set-ups (DVD player, laptop, projector, microphone) as well as a nearby kitchen, all things that are not always readily available in the multipurpose rooms or gymnasiums. In addition, the library's heaviest programming time is during the summer when those facilities are not available for use.

Or why can't you partner with the school libraries for after school and weekends?

The public library serves all ages - from birth through senior (adult) services, while a school library is focused on the specific curriculum of the grades of that school. ​In addition, while the public library open access for all, school safety regulations do not allow for random members of the public to be inside public schools.

What about parking? Will the new library mean there will be less parking?

The Village of Plainfield conducted a downtown parking study in the fall of 2016 and concluded there is adequate parking downtown and that in fact, the Library/Village parking lot is underutilized. While some spaces will be used for the addition, the Library is under contract to purchase property on Route 59 to accommodate the expanded Library's parking needs. The Village is expanding the Des Plaines Street parking lot (one block west) with an additional 32 spaces by mid-July 2017. View the Village Parking Study: https://legistarweb-production.s3.amazonaws.com/uploads/attachment/pdf/32106/Plainfield_COW_Presentation_10.24.2016.pdf

When will the new building open?

Construction of the addition would begin in spring of 2018 and take up to two years to complete. Because the current building will be retained, construction will be phased in, requiring collections and everything in the current building to move into the addition once constructed. When the renovation is complete, the Library will move everything into its final position. The Library intends to remain open during the project, however, there will be times when it will be closed for safety reasons.

The Library Board of Trustees and architects at Nagle Hartray are developing a concept for the expanded library in keeping with the character of downtown and the residential neighborhood. Full specification plans will be developed after a successful referendum and will involve public input.  Renderings will be available in mid-February on the website: www.papl.info/future.

What will the new library have that the current library doesn't?
My Account