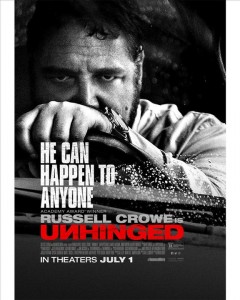 A man (Russell Crowe) is watching a house in the rain. He gets out of his truck with a crowbar and breaks down the front door. He then attacks the man and woman inside. This begins his violent spree.

Rachel (Caren Pistorius) is late taking her son to school. When the truck in front of her doesn’t go when the light turns green, she impatiently honks on her horn and then drives around him. He doesn’t take to kindly and tells her so. She won’t apologize and he begins to follow her. He begins to terrorize her and hurts the people she loves. Will she be able to stop this man before it is too late?

This was intense from the very first scene! It held you the entire movie and you didn’t know what was going to happen. Russell Crowe plays an amazing unhinged man! Rated R