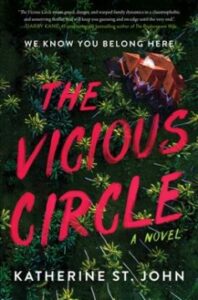 Sveta is at a crossroads. She just found out her fiancé has pushed their wedding another two years because that’s what his mom wants. She has been trying for years to fit in with his family but all they see is a gold digger. But all that changes when her uncle dies and leaves his entire estate to her, his 180 million dollar estate.

Sveta is now headed to a remote jungle in Mexico, where her uncle has been living for the past few years. The only way to reach it is by helicopter and then by boat. Along for the ride is Lucas, her uncle’s attorney, who Sveta had a brief, didn’t end well relationship. Her uncle was a big time self help guru and his estate in Mexico is home to many of his followers. His “wife” Kali also lives there and has taken the lead. Sveta isn’t sure why he left everything to her and not Kali.

Once there, Sveta wishes she hadn’t come. It is a very cult like vibe and Kali is already claiming there is a second will. Sveta only planned to stay for 24 hours but sudden they are stranded there. She doesn’t know who to trust including Lucas. As she starts asking questions, if becomes clear everyone has something to hide. And her uncle’s death is looking is looking very suspicious. Will Sveta get the answers she is looking for or will she meet the same fate as her uncle?

I really liked this book. Some of it was predictable but I was eager to find out what happened and how she was going to get away. I would recommend this one!